1st Armoured Division in Box 37 has been getting a bit of work done to it over the weekend. They had a reorganisation and all their divisional tactical signs added, as best I can judge. For amusement, have a close look at the divisional Rhinos. With a bit of imagination, you can see pigs, poodles and sheep pretending to be rhinos. It’s why I don’t usually bother in this scale (I’m not fond of transfers either)! The whole exercise took longer than I thought, but was fun. 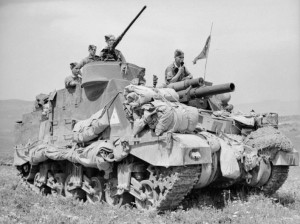 I came across this photo of 11th Honourable Artillery Company, and was surprised to see that the divisional flash is on the wrong side – so I have reproduced it as seen. They received their 24 Priests before 2nd Alamein¹

The odd-looking 6pdr on a plastic Hotwheels truck that is lurking in the top right of the photo above, is a placeholder for a Deacon.

“September 14, 1942
Rumours were rife that we were to have a new self propelled gun called a “Priest” and after a few days a batch of men were picked out to go to Heliopolis, which was in the Cairo area, to an American base, to learn how to use the new equipment.“

“The Regiment received a full quota of 24 Priests, but we learned later that the Americans had sent 72 in all, but all the others had been on a ship, which was sunk on the way across.

It thus turned out that we were to be the first British troops to use a self-propelled gun in action.“