It is hard to dispute that most 15mm wargames figures are working caricatures  that aim to convey the essence of a figure whilst being easy to paint. There are exceptions, of course, but anatomy largely takes a backs seat to over-emphasising heads faces equipment and uniform details. 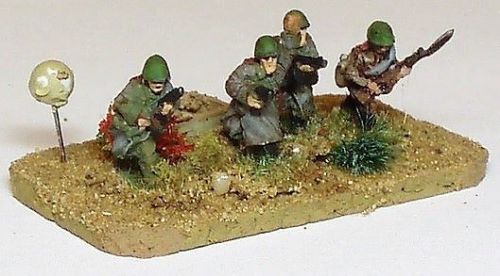 I have ranted at length about this before, here, here, here, and here, so it was with great pleasure that I noticed that first Peter Pig Germans, and then Russians were starting to look more anatomically proportioned with finer detail. Martin Goddard has achieved this with some figures by the simple expedient of adding a shim below the belt buckle to give figures an abdomen, instead of modelling the legs directly onto the belt.

A couple of the leaning forward figures look a bit odd from some angles, but overall, the result is excellent, giving properly proportioned figures. The results are not so different that they  look wrong with older figures in the range – the older figures looking quite reasonable in themselves and better than most of the older FoW and newer PSC¹ offerings. The new figures though are close to being as good as some of the newer resin-printed figures, and being metal are much more robust. The mix of figures available is wide enough to give plenty of variety when grouped in threes and fours. So hats off to Mr Pig! My painting does not do the figures justice close up, but looks fine from three feet away