The Skytrex 3.7cm Flak 36/37 and Syborg 3D Sd Kfz 11 have been sitting around undercoated for a while now. I finally married them up on a single base and added a bit of colour. There is not much pictorial evidence around of prime movers for the Flak 36/37. I found pictures of an Opel Blitz and a captured French Citroen online, but have no idea whether they are representative  or not. Going to the Milicast site, suggests that heavy field cars, trucks both armoured and unarmoured, were pressed into service as self-propelled mounts. I generally reckon that Milicast are pretty accurate in their choice of models and information, having strong links to MAFVA.

At 1,550Kg combat weight, The Flak 36/37 is well within the limits for an ’11, as it also towed the zwillingen twin barrelled version of the Flak 43 (according to Wiki). Mine is painted up in a simple desert scheme of sand with grey showing through. I improved the texture of the canopy by the simple expedient of sticking tissue paper to it, to hide the contour lines that are endemic to FDM printed models. 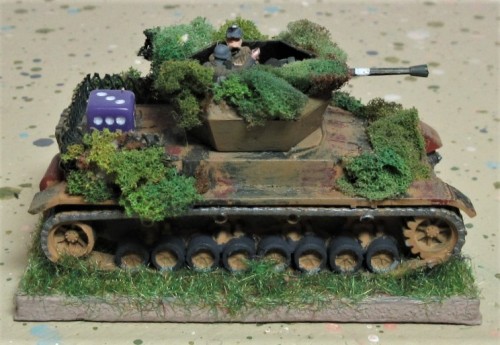 There is no shortage of pictures of self-propelled mounts on Sd Kfz 7/2s, (about a thousand produced) or Flakpanzer IVs (240 Möbelwagen 3.7cm and 43-46 Ostwind 3.7cm) etc., however I think that the majority of these guns would probably have been towed by wheeled transport in the Luftwaffe, with half-tracked tows reserved for the Luftwaffe field divisions.

Crews should be painted as Luftwaffe, or army. If army, they may either have white infantry piping if Flabatallion with 2cm and 3.7cm guns, all on self-propelled ,mounts; or red piping if artillery in mechanised mixed Heeresflak Batallions in Corps orbats, with three 8.8cm Flak companies and two 2cm/3.7cm companies. the crews in black below are not Panzer troops, they are still in their undercoats!

For NQM, I simplify orbats to show Heeresflak Batallions as artillery with SP 8.8cm and Flabatallions as infantry with SP 2cm and 3.7cm. If it’s self propelled, then it’s army, but if towed then Luftwaffe. Nierhorster confirms this, showing 135 Flak Regiment as having four Luftwaffe mixed battalions attached to DAK. Army Flak also had machine guns. YesthatPhil has a superb scratch-build of a horse-drawn version  here.

For anyone modelling below corps scale, searchlights were spread out amongst the Flak battalions.  Andrew Bruce’s blog in the sidebar to the right, is very helpful with this source: Special Series 10. German Antiaircraft artillery (1943) Military Intelligence Service, War Department [https://drive.google.com/file/d/11vE6fYDGCm1rCPyU9gBn1baCOW3MI-jv/view] Accessed 14/2/21