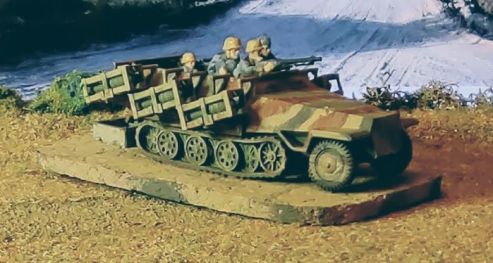 This beautiful STL is a little resin 1:100 scale gem, printed with a couple of minor flaws on the frames and left hand side of the idler wheels, that in no way detract from the model. A string of contact adhesive bridged the two gaps on the frames, and the wheel flaws are obscured by the frames. I continue to be impressed by the fineness of detail modelled, with undercuts that would not be possible in cast resin. Garry at PGM is also meticulous about removing supports. I have never had more than one or two left in place, and those usually only come to light when the undercoat is sprayed on, so fine are they. So another model added to my collection that I am very happy with, and my first 251 Ausführung D. I painted mine to fit in with my 1943 and later Panzer division. As ever, it is battle ready, with shading and markings to follow before the war ends. 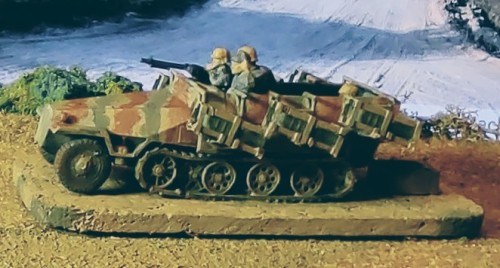 The “Stuka zu Fuss” equipped the Panzer Pioneer Kompanie of a Panzer division; initially the third platoon, and was used as a relatively short-ranged (about 2 Km) area demolition weapon¹. https://www.worldwarphotos.info/gallery/germany/halftracks/sdkfz-251/ gives a crew of 7. This link https://www.youtube.com/watch?v=60oHeCZHtvI&ab_channel=MilitaryHistoryVisualized is a useful overview of employment for the Sd Kfz 251 but has nothing to say about use of the 251/1. The vehicle probably filled the same role as the Churchill AVRE,  but with a bigger bang delivered less accurately when the assault pioneers needed to knock something down or out that was holding up the Panzers, such as a defended position. The picture below of a 251/1 in Poland 1945 makes it clear that the unit was being used from a static position, evidenced by the large pile of discarded frames to the right of the picture.

One of the many model kits in 1:35 showed a trailer, but of all of the contemporary photos that I have seen, none show trailers. It would seem restricting to be towing something if you needed to reverse away to reload, having unloaded ordnance from close range in a built up area: All supposition on my part of course. The rockets were fired electrically from a safe distance, and if the next photo of a 253 does not show firing on exercise with a couple of range safety staff, then it may be that  Sd Kfz 253s were used as firing vehicles. Only 285 of these were built according to Wikipedia, so just enough to go round SP artillery batteries,  with perhaps a few spare for the Panzerpioneere?

The next photo shows the pretty crude sights, basically two white sticks on the front of the vehicle. I have not bothered to model these but may do later. If your rocket is big enough, then “fairly close” will do, and the system survived pretty much unchanged throughout the war. 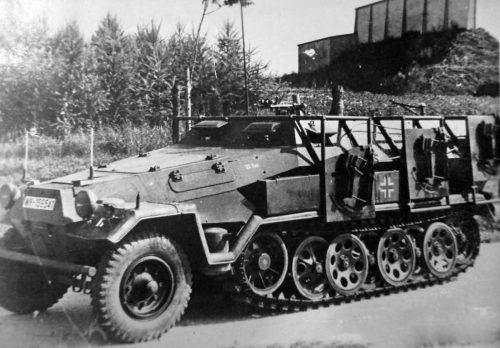