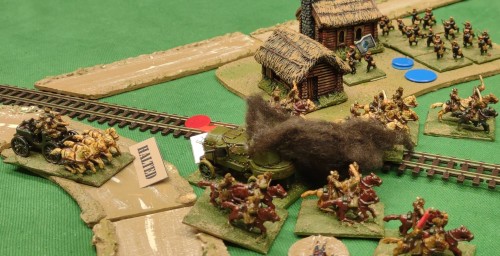 No, not that unit … the other one over there!

In a very welcome return to hybrid face-to-face wargaming, YesthatPhil, Trebian and I met up at Shedquarters for a game of the Russian Civil War. This is a game of Trebian’s in development, so I was less interested in the rules as in the setup and mechanics of running a Zoom wargame from the umpire’s end. The main takeaway lesson that came over loud and clear is that players need signposting clues on the ground.

Red Cavalry pass a scratchbuilt Garford armoured Car (one of YesthatPhil’s) at the gallop.

Ex-military types have little trouble talking section fire on to the “red hats ten o’ clock left of the burning armoured car on the road junction twelve inches to their front”. Civilians , alas are prone to saying “fire at that infantry unit by the wood, no not that one, the other one over there”. My time as a toy pusher passed agreeably, with much wry amusement. Coffee, cake and chocolate was involved for those in meatspace.

“They’ve got a Cave Troll!” – The Garford squats down on the key road junction in the centre far, far distance left of the village.

The game was splendid, with Trebian doing most of the sums, of which there seemed to be a lot. There was a proper Dr Zhivago cavalry charge across open fields and a satisfactory amount of to and fro-ing with infantry in a key village at the crossroads.

Red and White cavalry get properly stuck in. Urrah!

Treb has put a lot of work into getting the period feel right, and it is paying off.  He threw four armoured cars into the battle to see what would happen. They did not overpower the game, although a burning model T Ford probably wished that they were elsewhere.

The Garford was soon renamed Garfield. It was close-assaulted by infantry and went WOOF!

“Is it safe to come out now?” Discretion proved to be the better part of valour for the White armoured cars.

Richard Lindley officered the Whites and claimed a victory. Steve Churchus and Will Whyler ran the Reds and also claimed victory, because of self-evident historical inevitability. Trebian claimed the last chocolate square, and deserved it for putting on an excellent playtest. Wins all round 🙂

16 responses to “Russian Civil War Interlude – Hardly Mechanised at all.”