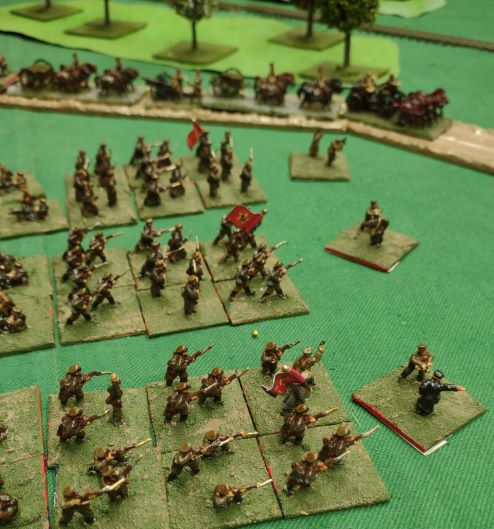 Back at Shedquarters with Trebian and YesthatPhil, but joined by Tim Merry, with Richards Lockwood and Lindley,  Ian Lowell and Jonathan Freitag apparing online, the Russian Civil War mayhem continued.¹ This time, there was an armoured train. Trebian tells me that of all the questions he gets, “Will the rules handle armoured trains?” is the commonest (so yes, they will). Each side had four infantry units with artillery, three cavalry units, armoured cars and Ford model Ts. The object was to capture the main station, and destroy the enemy.

The train was the undoubted star of the show in the same way that the Death Star dominates Star Wars. It loomed out of the trees, shot stuff and then was called off to do stuff elsewhere. It is worth mentioning that Trebian only counts the gun car as the real estate that the train occupies. The picture above makes no sense otherwise, although the cavalry base leaping over the engine looks dramatic!

It is also worth mentioning that a game of this size would normally be played over a larger table, when the extended cavalry moves make more sense. Because of the size of the game and number of players, only two moves were completed, but because each move consists of three actions for each unit, and units activate in a Ugo-Igo sequence, then it felt as if we had played about sixty mini moves. I still had plenty of time to push toys, make armoured train noises and take photos.²

Red Infantry assault White Armoured Cars. “Have you got a flag?”.

Because this was a playtest, there was still a lot of Trebian telling players to roll dice and being asked “What do I have to get?” or being told “It’s changed from last time”,  although the online players are getting the hang of it. The Quick Results Sheet (QRS) is the usual example of the type, with dense tables filling two sides of A4. A nice feature of the rules is that units test for morale but can be coerced into action if they fail. They carry this resentment with them for the whole of the game and reward the coercer by failing morale when it really matters.

Red Cavalry charge the White Artillery seen in the Station photo two above.

I looked at the initial layout of the table and thought that the Reds would be kicking the Whites out of the station, but somehow, the Whites became diverted by Red artillery covering the southern side of the table, so the Reds were able to sneak a company of armoured motorised infantry into the station whilst everyone’s attention was fixed on the armoured train. Two cavalry units that charged infantry were shot away, the White armoured cars proved useful as supporting pieces, but were vulnerable to close assaulting infantry and the Red Austin-Putilov armoured cars proved that Ford model Ts are no substitute for a proper pair of armoured dustbins on an under-powered chassis with poor cross country performance. 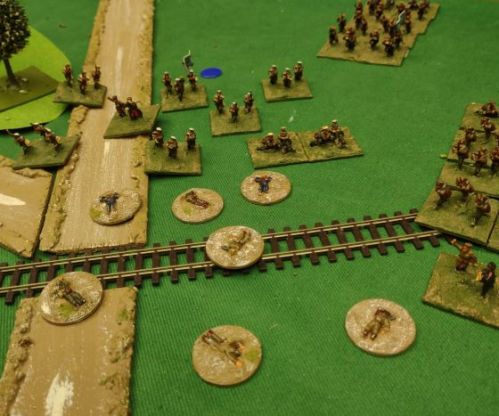 In an entertaining example of real-life military problems, Trebian’s Red artillery observer went AWOL, and Treb picked up an infantry commander to command the artillery without realising it. He then spent most of the game searching for the missing infantry commander, who did an excellent covert job directing the artillery, until it was destroyed by marauding White cavalry. The infantryman then went back to his own unit and shot away the White cavalry. The artilleryman reappeared at the end of the night, looking unruffled, as the toys were packed away.