In support of ground forces, the RAF fought in 3 Main Theatres: Western Europe, The Mediterranean and The Far East. It was mainly successful in its role of winning air superiority, and as the war went on, in supporting ground forces. The Desert Air Force in particular was noted for the close cooperation it managed with the 8th Army

Forces were organised into Flights and Squadrons  by type of aircraft. Squadrons (of typically 12-16 airframes) were then formed into Wings, Groups and then Air Forces. I usually model one aircraft (s1) to a  Squadron, and 2-3 to a Wing, upping this to as many as 6 or 9 depending on the scenario. The reason for this wide variance is to take account of serviceability,  availability of aircraft and the need to have a reasonable number of models on the table.

The lists below are not claimed to be authoritative or complete – if I could not find a record of use, then the aircraft type was not included. Some inclusions are from uncaptioned photos of the AC in theatre camouflage. Any assistance in verification is welcome. Some prevalent transports such as Dakotas served everywhere but are not included as combat aircraft.

In the Western Desert, the terrain was ideal for armoured and air operations.  Gloster Gladiators, Hawker Harts (two seat biplane day bombers), Lysanders (liaison/recce) and Gauntlets (fighters) were the first aircraft to arrive in any numbers in the Western Desert, followed by Hurricanes. Initially Blenheim Bombers were followed by Mosquitoes, Wellingtons and Beaufighters. De Havilland Rapides were used for Air Evacuation.

The following types are recorded as serving in the Middle East:

Bristol Beaufort (700 built by the RAAF) 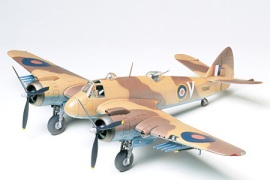 Fairy Albacore (land and carrier based)

Gloster Sea Gladiators were famous for the air defence of Malta. (This one was stationed off Crete)

Martlet I “In July 1941 805 Squadron (Australia) re-equipped with 12 Martlet Is as part of the Western Desert RN Fighter squadron, serving with 264, 269 and subsequently 234 RAF Wings until the joint unit was disbanded in February 1942. The squadron moved to the Canal Zone in August 1942″

Martin 187 Baltimore (RAF, most then passed on to the SAAF, a few to the Fleet Air Arm) (hyperscale.com)

A significant part of the United Kingdom’s air strength was made up from Australia RAAF (55) Squadrons, Canada RCAF (84) Squadrons, India (9) Squadrons, New Zealand RNZAF (28) Squadrons. These figures are for the whole war.

The next section is a direct Quote from Wickepedia, with Author’s additions in bracketed italics, and NQM model strengths added.

On 10 June 1940, RAF bomber squadrons in AHQ Egypt—under the direction of No. 202 Group RAF—totalled five squadrons of Bristol Blenheims, one of Vickers Valentias and one of Bristol Bombays.[2] The Valentia and Bombay could either be used as troop transports or medium bombers. (Consider each squadron as 1 strength point and amalgamate strength points if wished to for (s3) wings)

Prior to the Italian invasion of Egypt, under Air Commodore Raymond Collishaw, the RAF in Egypt—which comprised nine squadrons—focused its activities on ground support, reconnaissance, and only when necessary aerial combat with the Italian Regia Aeronautica. The force at Collishaw’s disposal consisted of No. 33, No. 80, and No. 112 Squadrons with Gladiators (s3 in total), No. 208 Squadron RAF with Lysanders (s1), four Blenheim squadrons (No.s 30, 55, 113, and 211) and No. 216 Squadron RAF with Bombays. With this small force, the RAF had to “equate its attempt to dominate the front line with avoidance of unnecessary losses”.[3] Aggressive actions induced a “defensive mentality among the Italians”, aided by expedients such as using the single Hurricane  in the Middle East, rapidly switched between landing grounds, to provide an exaggerated picture of British strength in the eyes of Italian reconnaissance aircraft. There were occasional signal successes as well; on 17 August 1940, Gladiators covering the Mediterranean Fleet shot down eight Savoia-Marchetti SM.79 bombers without loss.

The force in the Middle East was clearly too small, and reinforcement via the Western Mediterranean was hardly practical due to the ranges involved, which only bombers could achieve. Thus, an alternate reinforcement route began to be pioneered via Takoradi in the Gold Coast. By this and other means, by the end of November 1941 the RAF in Egypt had been bolstered by No. 73 and No. 274 Squadrons with Hurricanes and No. 37 and No. 38 Squadrons with Wellingtons, as well as several South African Air Force squadrons, ready for the beginning of Operation Compass. During Compass, “the squadrons of Hurricanes, Lysanders, and Blenheims strove hard to keep pace [with the ground forces], often landing after a combat sortie at a more advanced strip than from which they had set out.”

On 19 April 1941, RAF No. 204 Group was created under the command of Air Commodore Raymond Collishaw and consisted of the following units:

On 30 July 1941, Collishaw handed over No. 204 Group to Air Vice-Marshal Arthur Coningham. Later that year, the RAF’s whole Middle East Command came under the command of Air Marshal Sir Arthur Tedder. On 21 October 1941, Air Headquarters Western Desert was created by upgrading 204 Group to command status (in time for Operation Crusader).

Three wings operated in North Africa at first, 258 and 269 Wings operated over the front line and 262 Wing defended the Nile Delta. On 20 January 1942, the command was renamed Air Headquarters Libya; however, on 3 February it reverted to its former name of the Air Headquarters Western Desert.

On 27 October 1942, the Western Desert Air Force (WDAF) was organized as shown below:

4. ** Thanks to Scott Saylor for the pointers on these entries.

I Dream of Minis

Painting miniatures...even while I sleep.

Little Wars on a Budget

Reforging your able archer with only seven days to the Rhine.

Mainly concerning my wargaming hobby, with a bit of reenactment thrown in as it happens.

The Grand Duchy of Stollen