Chris Kemp’s Not Quite Mechanised

HQ elements including communication, training and ambulance. (there should be 1 ground crew strength point per aircraft model)

Strategically, forces were organised into Air Armies which, in 1943 contained 10 organic regiments and 13 attached from GKO Reserve, 23 in total:

Additionally, each air army had a regiment each of transport (GVF), recce and artillery spotting aircraft – a total of 23 regiments – (23) NQM aircraft models.

November 1942 saw the introduction of air corps, eventually producing 14 fighter, 6 bomber and 9 Sturmovik corps, some 30 in total divided amongst 13 air armies. But it is important to bear in mind that 40-50% of all forces were allocated to air armies as occasion demanded from GKO reserves

The Soviets saw the Air Force as a close partner to the ground forces, and the large number of attack, and tactical bomber aircraft reflect this. Unlike the Germans, who produced a bewildering number of designs, the Soviets concentrated on quantity, and when a design worked, they stuck with it.

The following aircraft types were used by the SVVS. I have not included purely strategic aircraft, trainers or interceptor night fighters, nor aircraft where only small numbers saw service at the very end of the war. , I have included the Soviet designation, (first operational use) and [Type]. If I have been able to determine, I have given operational areas and any comments that help: If it looks a bit like an easily available aircraft that it can be modelled from, I have noted that. The main source for this section is Gunston, (1978), Combat Aircraft of WWII. Arranged by date of entry into service 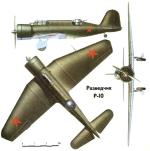 Now available from Zvezda (Since 2014)

See the Author’s rubbish conversion from a Flying Fortress at the top of the page.

Mikoyan MiG-3. (1941), [Fighter]. (Converted by the Author from a Spitfire before kits became available from Zvezda)