Soviet divisions were grouped into corps of two or more divisions. Corps were grouped into armies or one or more corps, and armies were organised into fronts. At corps, army and front level, progressively heavier levels of equipment were found. Fronts and Armies did not spread their heavy support equipment around, but concentrated it at points of attack.

Heavy and specialised units such as 203mm super heavy artillery battalions, bridging battalions and maskirovka units all appear at army or front level in NQM. Higher HQs rarely come into contact with the enemy, so their combat strength is not really that important. What is important is the amount of space that they occupy, so one can go to town with mini dioramas to give a distinctive feel to the HQ.

A Sample NQM Front HQ should contain models to represent :

“The situation around KHARKOV is most serious Comrade Chestikov.” 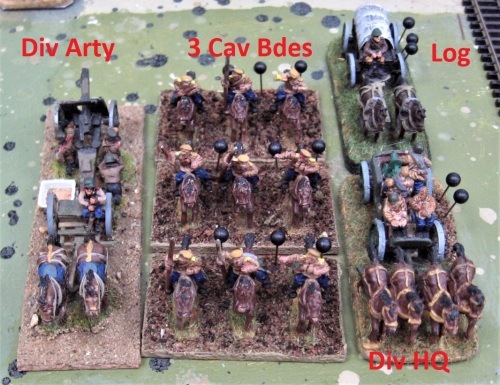 Similarly army and corps headquarters should be represented in scaled down form. Even producing fairly minimal markers for these headquarter starts to fill the real estate up in the rear areas in a most satisfactory manner.

Where it becomes difficult to try to understand the size of Soviet units, is that for some periods of the war, units were very much under strength, just as the Germans were towards the end of the war. So a unit might be called a Tank Brigade, Division , or Corps, and yet be only as strong as a western Tank Battalion. To gain a deeper understanding of the way that unit strengths fluctuated, it is well worth reading SJ Zaloga.

Here is a whole Rifle Corps laid out at NQM FSO scale: 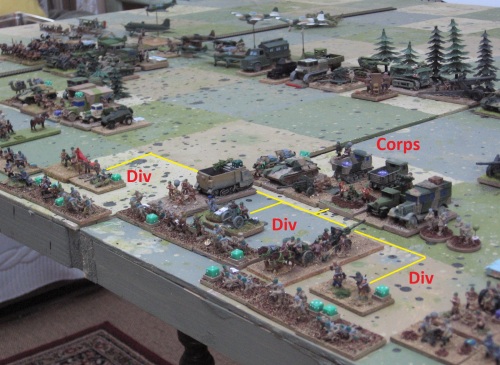 In the NQM Ostfront campaign, we usually assume that an NQM CSO Tank Brigade is 6 tanks strong at full strength, and 3 at half strength. We give a division 2 Tank Brigades, and usually assume that a Tank Corps is about the same strength as a Division. The more units that fight with on the table, the higher the orbat scale used . It is crude, but it seems to work. 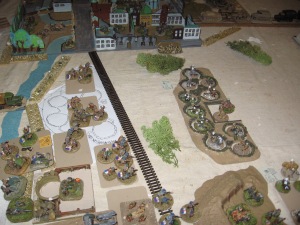 An effective scale reduction at Corps Scale Orbat (CSO) might be a division of three to four battalions, with one or two regimental headquarters and divisional support of at least one mortar or divisional gun unit.

Here is an NQM FSO Front laid out in all its glory: