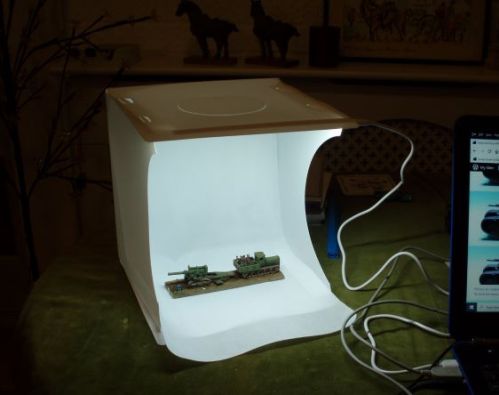 Seeing someone’s light box on their blog, prompted me to buy one online. For the princely sum of about £12, this neat little origami cube came with six coloured backdrops, a USB cable that powers an LED strip, and a carry bag.

My indoor photos have suddenly improved. About time too! I can hear the relieved sighs of patient folk who have been putting up with my blurry badly lit photos for years. Judge for yourself.

I have had my eye on a True North M1931 203 mm howitzer¹ from Old Glory UK for some time, as although Irregular Miniatures offer one in their Really Useful Guns range, the casting is a tad too generically vague, even for me. I know that this shouldn’t matter for a representational piece in a corps scale game, but I’m allowed to be irrational and inconsistent if I want.

The tractor fits together with little trouble with a gap that needs filling or hiding between the engine block and the cab, which is in 5 pieces. Mine came with two left doors, and I couldn’t be bothered to ask for a right door. Someone has a kit somewhere with no left door!

It is a little trickier to fit the tracks square to the howitzer. If you just stick them to the trail, they will angle inwards. Everything else goes together with a minimum of filing. There is no obvious point to mount the derrick,but the picture below, and others show it on the left hand side of the trail, looking towards the barrel. The seats that flank the gun are a little tricky to line up, but again, pictures show them knocked out of position, and I wonder how much they were actually used in practice.

The gun was towed in two pieces, and the 350 horsepower Voroshilovez Heavy tractor was used to pull the carriage, replacing the 131 horsepower Komintern heavy tractor shown above. The Komintern was retained to tow the barrel on its separate carriage. For such a solid model, my usual cork bases are not stiff enough, so I used 5mm structural plywood. This will not be an issue for anyone mounting the gun and tractor separately. The inclusion of the trolley used for moving shells is a nice touch. Pictures show all sorts of makeshift ramps in gun positions. All in all, a very satisfying solid pair of models for annoying your German opponent. They should be an essential part of any Soviet wargamer’s collection.

After  a couple of basecoats, some muddy brown and a highlight, the piece is battle ready rather than finished. It is just waiting for some Piggie crew, base texture and more mud! 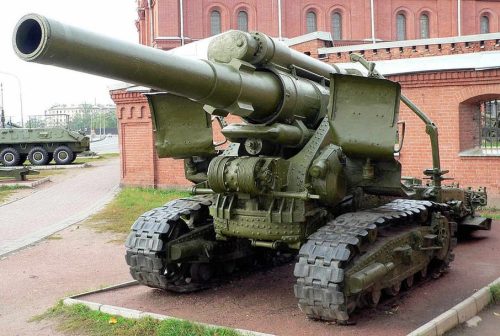